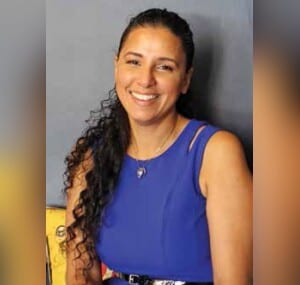 Rosangela Parker has been in her position as a Main Street executive director since last June. In that time, she has overseen a dramatic expansion of the Church Street District, recruited an associate director to facilitate that expansion, rebranded the district to the City District and helped businesses in the district’s boundaries weather the COVID-19 pandemic. We sat down with her on a Thursday afternoon at CFS Coffee in the heart of Church Street as she was in the process of unveiling the rebranded main street district.

Quite the eventful first year on the job. How have you stayed sane?

I’m not quite sure. (Laughs.) I’m questioning that now as I’m trying to launch new social media handles, launch a newsletter which has not been in existence for a decade now, launch a new website built from scratch, and having to do all this at the same time. And then we’re really trying to take care of our business community, reaching out to our legislators and local officials, trying to find solutions and remedies for these businesses that are in dire need right now just to survive this pandemic. 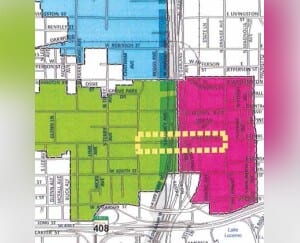 This expansion map, which was approved by the City Council in October, shows the three zones of the expansion of the then Church Street District into Parramore. COURTESY OF CITY DISTRICT

Talk about the rebranding to the City District. What conversations did you have about what you wanted to convey the district as?

Well, I think a big part of it is trying to connect with what’s already here. It’s not rediscovering what’s here; it’s really pinning a name. This is the city. This is the heart of Orlando. These businesses are all part of the greater downtown area. And so how do we connect them all? There’s so many unique

personalities and such an eclectic group of businesses.

As you look throughout the entire district and we’re talking about Orange Avenue, you think of the nightlife and entertainment, but then you have areas where you start seeing more of the dining, or maybe you’re seeing the venues. Or you start crossing into Parramore, and you’re connecting a little bit more with the history and the culture. And then you find the newness of Creative Village and the younger crowd that comes with the students living on campus, and Orange Blossom Trail with its industrial connection and its history. We were trying to really find something that would represent everyone and really define the district for what it is, the City District.

You were born in Puerto Rico and moved to Florida at a young age. What brought your family to Florida?

My story is one you probably wouldn’t believe. I did come from Puerto Rico as a child. I think I was five years old. I have two brothers, and my baby brother was probably just under a year old. We actually went from Puerto Rico to Indianapolis, Indiana. You’re like “What’s in Indianapolis, Indiana?” Well, my parents did not have a formal education. They were brought up in a very simple life. You’re talking about an era when a woman was meant to be a home keeper, and so my mother was pulled out of school because “that was a waste of time. She needed to focus on the household.” She helped out her father and mother at the house and took care of her younger siblings.

And my dad, I believe, a second

grade education is as far as he got before he was pulled out of school and was required to help out with the house and the farm and the animals and everything you can think of. So when they moved to Indianapolis looking for a better life, they were actually migrant workers. They were U.S. citizens that worked in the migrant system working the land and helping people farm their crops.

So, my mother decided to go back to school to get a GED because she always was ambitious and wanted to do more; it’s just her family wouldn’t allow her. So she went and got her GED, and then from there, they told her she would be a great social worker, and she wanted to get into that, but the season ended. The crops shifted, and now they were migrating to Florida for Florida crops.

So with the crops, she left the college and ended up coming down to Florida, where we settled in Bradenton, and as you know, there’s a big section south of Central Florida that does a lot of farming between Ruskin and all these different areas. So they were helping out with the crops there.

Tell me more about your parents. They eventually moved on to bigger and better things.

Now that’s not the extent of who they are. Even though my father only had a second-grade education, he was very gifted in taking things apart and putting them back together. And people would come to him, and he’d find tools, or he’d go to different places, and he’d find something that wasn’t working, and he’d fix it and get it working. So it wasn’t long until people were bringing him their power tools. Instead of throwing them away, he’d repair them for a few dollars, so now he had this little side gig going on.

And my mother, who had been sewing uniforms and sewed shoes and has sewn everything to provide for her family as a young woman, ended up working at Wellcraft Marine … My mother designed boats for Don Johnson and Hulk Hogan. Their speed boats, she was the one that was designing those seats because she did the upholstery.

You and I went to the same community college in Bradenton. Talk

about your schooling a little bit.

I got my associate’s degree there, and I pretty much didn’t stay in any one place for more than like two years at a time. I was very nomadic. But, yeah, I went to Manatee Community College. I love sciences and math, and so I was really into — well, some thought I would end up in the medical field, and I did register to attend the University of South Florida in their medical endowment program, but ultimately that didn’t work out. I had a lot of life situations that caused me to change course. And then I ended up in research, working in plant virology and working for Dr. Jane Polston up in Gainesville.

I know you ask, “How does any of this relate to what you’re doing now?” And what’s interesting is, I went from working in plant virology to working in economic development, and my argument to them was, like, it’s all data. We’re using data to make informed decisions on how we want to proceed and do economic development and what it takes, and so that then translated into tourism, which again, you’re dealing with data; you’re looking at the analytics of everything.

So, my degree that I ended up getting at Seminole State was in business information management. And so again, you’re just gathering all those data points and turning it into usable business information. And that just translates into every aspect of our lives, so it’s been very resourceful. But, yeah, it’s just, it’s where your heart is, and then for me, when it comes to data, it helps me make informed decisions and make a case for just about anything, and so it’s worked out well.

It’s fantastic. Absolutely fantastic. I love having boys. My boys are unique, each one very different, and I absolutely love and adore each one of them and embrace their uniqueness and celebrate them every chance I get.

Talk about the importance of your Main Street District getting involved in the Parramore community.

The expansion of the district has brought on new opportunities but a ton of challenges, and especially now in this COVID environment. Prior to, it was really just introducing what the main street concept is all about. A big part of that is historic preservation. There is so much history and so much art, and there’s just so much that’s happening in that Paramore community that we have just barely started to scratch the surface. There are so many people that have amazing stories, and I’m like “We should share that. We should be telling everybody. Who knows this? Who doesn’t know this? Why don’t they know this?”

But the challenge is, right now, it’s survival mode. So while we haven’t stopped trying to do what we do in the midst of this, it’s really just been providing resources — whether to the Parramore community or anybody that’s within our district that

we can reach. Right now, we’re just sending out good vibes and as much positive information and as many tools as we can provide. You’re looking at a lot of businesses that, especially in mom-and-pop environments, that don’t really focus too much on marketing and now don’t have the foot traffic and are having to rely on the Web to be able to access new customers or get that information in front of them.

A lot of people look at Orange Avenue and think

it’s just a strip of bars and clubs. How are you trying to change the image of that part of your district?

You know, it’s a little different. I wouldn’t say so much that I’m trying to change it, but maybe just help redefine it. A big part of it is perception. And so, there are stories to be told, and I think once people are able to connect with some of the different businesses, the business owners, the opportunities [will come]. You know when you have a comedy club there and the different talents that have come from that space. Not everybody knows that.

We have an amazing jeweler here that, unfortunately due to the pandemic, we may lose, effective end of this month with Bay Hill, but Stacey [Papp] is an amazing jewelry designer, and being able to have that talent downtown, I don’t think people really understand the access that’s available. And so those are just a couple of the businesses that are on Orange Avenue. And yes, there’s a lot of the bar scene and the nightlife and the clubs, but that’s only one part of our district, and I think part of it is, we can’t just focus on the one.

There’s so much going on around us between the different roadways or whether it’s the different sections of the district. So maybe that particular area, that particular time of day is not your cup of tea, but there is something here for everybody. So part of it is telling the story of what is here and introducing you to those things that maybe you haven’t yet experienced or are familiar with.

When we talked about the expansion of your district in October, you told me the eventual goal is for the Parramore

section of the Main Street District to branch off and become it’s own district. Is that still the idea?

That’s correct. That’s a part of the agreement that we did with Orlando Main Streets and the City of Orlando. So that’s part of the contract – a five year review. So this is officially year one come October. Unfortunately it hasn’t allowed a lot to happen, but it’s in its developmental stages, so five year review to see if the Parramore community has what they need to be sustainable as their own Main Street.