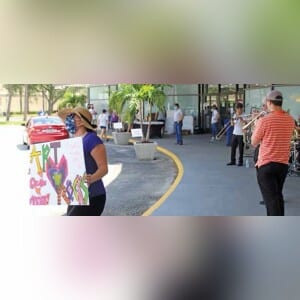 A brass band, homemade signs and cheers greeted those in the arts and entertainment industry as they took advantage of a food drive at the Plaza Live on July 24. S.T. CARDINAL

This was the second Friday Abby Cox came out to take advantage of the free meals and fresh produce courtesy of 4Roots. When she got an Instagram message from a co-worker about the food drive organized specifically for artists and entertainers out of work, she went to the Plaza Live to take advantage.

“It’s been great to come out and get food because I’m out of work, so anything helps,” said Cox, a scenic artist who has been relying on unemployment benefits since March.

Each Friday starting July 10, out-of-work artists lined up at the Plaza Live for the contributed food. Feed the Need Florida, an initiative spearheaded by 4Roots and local arts leaders, organized and funded the food drive for one of the industries most hard-hit by the novel coronavirus pandemic: the arts and entertainment industry.

“I think everybody sees the restaurants and stores or whatever, but don’t think of the arts. But there are tens of thousands of people here in Central Florida that make all of their income from arts,” said RK Kelley, an event organizer and former president of the Orlando Philharmonic Orchestra. “It’s not just the people on the stage. It’s the technicians. It’s the designers. It’s the management. It’s the ushers. It’s the box office people. So there’s a giant ripple effect.” 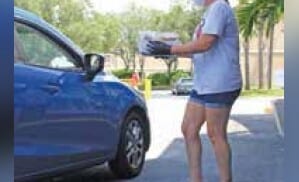 That’s why Kel ley, 4Roots and Feed the Need launched this initiative for artists and entertainers in the area. The Plaza Live event grew out of a similar food drive at St. Luke’s Methodist Church in Dr. Phillips, which also provided meals to the arts community.

Steve Fessler is another event organizer who was a former musician, conductor and entertainment manager at Disney. He said the idea of providing not only a hot meal but also fresh produce was to help the recipients use the money they would have used on food to keep the lights on.

“We really look at this as a saving the souls of those people, because they really do feed us,” Fessler said. “They feed our souls, and we’re trying to help them.”

Feed the Need has held food drives all over Florida to help those hurt by the pandemic and recently reached a milestone: 1 million meals distributed.

Kelley said that the Plaza Live food distributions would continue through at least August 14 and that it would continue as long as the need lasts and the funds are available. She also said the brass band and the cheering on of recipients at the food drive was by design.

“It’s not just like any other food distribution opportunity,” Kelley said. “We realize that when people are used to having positive feedback and applause as part of the reward for their work, and all of a sudden that’s silenced in their life, that can really do things to you emotionally and mentally. Keeping the spirits up and really making what might be a negative experience, to have to accept a food donation, we’re trying to replace those feelings with applause.”

The Plaza Live food distribution costs $ 3,000 a week to put on according to Kelley. Feed the Need is entirely donation-funded, so if you’re able to help, head to feedtheneedfl.org and choose “arts community meals” in the dropdown menu of the donation form.