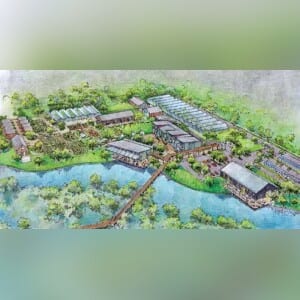 A rendering of the 100-acre Packing District development for The 4Roots Farm Campus. COURTESY OF THE CITY OF ORLANDO

In today’s City Council meeting, the terms of the lease for the 4Roots Farm Campus were approved. In the Packing District, 18 acres will be leased to the 4Roots Foundation for $10 a year (you read that right) with the understanding in the lease agreement that the land will be used as a farming education tool for the community. The City will provide $900,000 of capital improvement funds toward construction costs, which are estimated to be upward of $8 million.

The 4Roots Farm Campus will be more than just a field of crops. The site plan also includes classrooms, a café, an event venue disguised as a barn, a regular barn, cottages, a pavilion, two greenhouses and more.

City of Orlando partners with CareerSource to offer internships

If you’re looking for a job working with the City, CareerSource of Central Florida might soon have a listing that will interest you.

City Council approved an agreement with CareerSource to offer positions with the City for a maximum of 12 weeks and 40 hours per week.

The City recently began the process of raising minimum wage for its employees to $15 an hour by the year 2021, but these internships will be funded by CareerSource and pay an hourly rate of $11 an hour.

The contract signed with Career- Source to offer internships will expire June 30, 2021.

Orange County and the City of Orlando are working together to bring improvements to Lake Fairview Park.

Using funds received from the State of Florida from vessel registration fees, the County will provide $300,000 toward boating amenities at the park, which is owned by the City. Planning for the improvements will be completed by the end of 2020, and improvements will begin construction in 2021.

Big Storm Brewing Co., a Tampa based craft brewery, will soon be available to those visiting the Amway Center.

City Council approved a 10-year lease effective July 6 between the brewery and the City of Orlando with rent being either $1,500 per month or 10% of their monthly sales, whichever is greater. On the sixth year of the lease, rent will begin to incrementally increase, starting with a 5% increase on year six and an additional 2% increase each remaining year.

The agreement gives Big Storm the option to renew the lease for another five years when the original term expires.