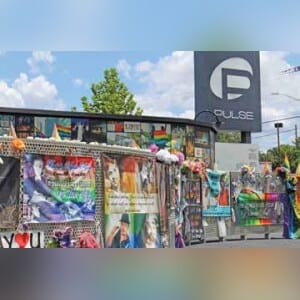 Art hangs outside of Pulse Nightclub in memoriam to the 49 who lost their lives there in 2016. S.T. CARDINAL

On June 12, 2016, 49 lives were taken and many more injured in one of the nation’s most violent and hateful attacks, the Pulse Nightclub shooting. Now, more than four years later, the nation is still honoring the fallen, the survivors, and the family and friends of those who lost loved ones.

In 2019, Rep. Stephanie Murphy proposed a bill with the help of Reps. Darren Soto and Val Demings to designate Pulse nightclub as a national memorial. This year, on June 26, the U.S. House of Representatives passed the bill and announced Pulse nightclub as an official National Memorial Site.

Soon after the bill passed, in a tweet from Murphy’s official Twitter account, @RepSteph Murphy, she stated that she was “proud to be co-leading this effort to create a place of healing for survivors & a welcoming place for all those seeking inspiration to create a better, safer, and more inclusive nation.”

Not only is Pulse now a part of the National Park System but the bill also allows the memorial to be run independently by the onePulse Foundation, a nonprofit created by the owner of the nightclub, Barbara Poma.

Poma said she and everyone at the onePulse Foundation were so thankful that the House of Representatives unanimously passed the bill, and they are extremely appreciative of the work that Reps. Darren Soto, Val Demings and Stephanie Murphy did in introducing and supporting the bill.

“We are always grateful when people come together to help us prove that love will overcome fear and hate,” said Poma. “The National Pulse Memorial will honor the 49 lives taken, survivors and first responders, while also educating future generations on the profound impact the tragedy had on Orlando, the United States and the world.”

Jamey Byrne, Pulse survivor, said that he hopes the memorial will have a positive impact on future generations to help them better understand the importance of love and affection.

“This will be a tremendous step forward in remembering those beautiful souls that their lives were cut short for just being themselves and in hopes that this national site will show and help others understand that we are all different but equal in that we are humans,” said Byrne.

Rev. Terri Steed Pierce, a local senior pastor at Joy Metropolitan Community Church, an all-inclusive church, said that they are thrilled to hear about Pulse becoming a national memorial site just down the street from them.

“For us, Pulse, which is part of our community and our neighborhood, has been a place to come to remember, to reflect and to offer care to those who may come to visit, said Pierce. “We never want to forget the sacrifices of those angels who took their last breath in this place, nor those whose lives were forever changed following this tragedy.”

Pierce also mentioned that she was at the site with Mayra Alvear, mother of the deceased Amanda Alvear, and that Mayra said she came as often as possible because it was the place that her baby had taken her final breath.

“I am grateful that Mrs. Alvear and countless other family members of all the victims will have a place to remember their dear loved ones lost too soon in a horrific hate crime,” said Pierce. “We pray that it remains a place to remember that even when hate tries, love wins. Love always wins.”

For more informat ion on the onePulse Foundation, to donate or to take a virtual tour of the interim memorial, visit onepulsefoundation.org.