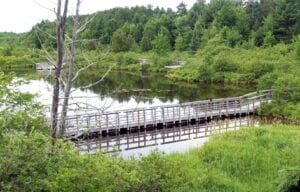 On a late July day in the summer of 1990, President George H.W. Bush signed the Americans with Disabilities Act into law on the south lawn of the White House, before a crowd of about 3,000 people.

The landmark civil rights legislation – which the U.S. Department of Justice said prohibits disability discrimination and guarantees that people with disabilities have the same opportunities as everyone else to participate in the mainstream of American life – was patterned after the Civil Rights Act of 1964, which prohibits discrimination based on color, race, sex, religion or national origin.

“It is long overdue,” a wheelchair user and manufacturer told the Times Herald in Port Huron a couple of days before the bill was signed. “It will finally open the door to official recognition of the largest minority in the United States, which are the physically and mentally handicapped.”

Today, the term “handicapped” would not be used, in favor of “people with disabilities.”

The Herald said, “The bill defines disabled as anyone with a mental or physical problem limiting ‘some major life function.’ It protects those with disabilities from discrimination in employment. It will guarantee access to all public venues – hotels, stadiums, retail shops, restaurants, buses, trains, airplanes and much more.”

Thirty years ago, when the legislation was signed, 43 million Americans – or about 1 in 5 people – were living with a disability. Today, the Centers for Disease Control and Prevention report 61 million adults in the U.S. have a disability, or about 26 percent of the population.

This statistic is vitally important for Michiganders, and others, seeking to enjoy and experience the beauty of nature, the fascination and educational opportunities offered by museums, libraries and other cultural resources, and the exhilaration of outdoor recreation.

The Michigan Department of Natural Resources has an ongoing commitment to improving access for everyone and has made substantial progress in that endeavor.

The DNR has joined numerous governmental agencies across Michigan in commemorating the anniversary of the Americans with Disabilities Act, pledging a renewed focus and more work toward greater opportunities for inclusion.

“We want to learn and discover more ways that we can help make Michigan accessible to everyone,” said DNR Director Dan Eichinger. “We at the DNR want to spread the word about the improvements we have made so that more people across Michigan, regardless of ability, can enjoy outdoor recreation as part of their everyday lives.”

In 2019, the Michigan Department of Civil Rights State Americans With Disabilities Act Compliance Division pulled together a committee of representatives from across state government, including the DNR, to plan a commemoration celebrating three decades of progress under this important civil rights legislation.

“Plans for a large in-person event were just underway when the committee saw it would have to pivot because of the impact of the COVID-19 pandemic,” said Diana Paiz, DNR liaison to the state committee and chairwoman of the DNR Accessibility Team’s marketing subcommittee. “The planning committee turned to an online strategy that would commemorate the 30th anniversary of the ADA and provide education to the public through a webinar series on state services that may be of particular interest to people with disabilities.

“It quickly became clear that the new online format would make the commemoration have a much wider and longer lasting impact than the original concept of a single in-person event.”

Michigan’s online commemoration series began in July 2020 with a live presentation, featuring Lt. Gov. Garland Gilchrist and recorded messages from Gov. Gretchen Whitmer and former U.S. Sen. Tom Harkin, who was instrumental in the effort to pass the Americans With Disabilities Act in Congress.

With the help of eMichigan, the Michigan. gov/ADA30 website was established, which includes a calendar of upcoming online events in the ongoing commemoration series and an archive of past events.

Today marks the debut of the Michigan DNR’s presentation on accessible recreation.

The DNR wanted to make sure the video itself was accessible, so it includes captions and American Sign Language Interpretation throughout.

Parsons worked hard to produce the video presentation for the DNR, which highlights numerous advances in accessibility, ranging from special motorized track and mobility chairs to hunting blinds with adaptive hunting equipment where hunters suck on a plastic tube to fire a rifle.

From state parks to beaches and waterfalls to shooting ranges, museums and libraries, the DNR has helped make accessibility more common where recreation is concerned.

“The Department of Natural Resources is committed to accessible use and enjoyment of the state’s natural and cultural resources for current and future generations,” said Mike Holsinger, ADA coordinator for the department. “Providing greater access to outdoor recreation in Michigan is key to increasing meaningful participation for people of all abilities.”

Holsinger said an internal DNR accessibility team was created in the late 1990s to provide broad representation across divisions within the department, as well as to supply a venue to discuss programs, new facilities construction or alterations, legislation, policy and procedures.

The DNR Accessibility Advisory Council was formed in 2007 as an external body of private citizens who demonstrate a clear interest in improving accessibility to Michigan’s natural resources. The council provides guidance to the DNR and outreach to the general public.

Members of the council, some of whom represent disability communities, are appointed by the DNR director. Council members also appear in the DNR presentation, along with Gov. Gretchen Whitmer and DNR Director Dan Eichinger.

“Improving accessibility for people with disabilities is an important part of my administration’s continuing work to foster inclusion for all people across Michigan,” Whitmer said. “It’s hard to imagine having equity and inclusion without accessibility.”

Visit Michigan.gov/DNRAccessibility to discover more on the numerous accessible recreation opportunities available to all users in Michigan.

Find out more about the Americans With Disabilities Act or Michigan’s commemoration of the 30th anniversary of this historic legislation being signed into law at Michigan. gov/ADA30.

By continuing to browse or by clicking 'Accept', you agree to our sites privacy policy.AcceptPrivacy policy
Near me
40 miles