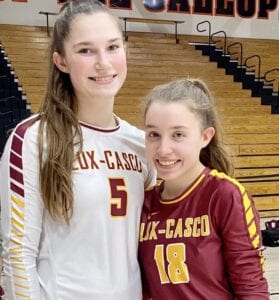 Sophomore middle blocker Autumn Flynn (5) is the daughter of Mike and Bobbi Flynn. Flynn is a 1993 Manistique High School graduate and Bobbi is from Bark River, Mich. She is the granddaughter of Ellen and the late Bob Flynn of Manistique, Judy and the late Darrell Peltier of Gladstone, Mich. and Jerry and Bobbi Sundquist of Menomine, Mich.

Senior libero Jillian Lynts (18) is the daughter of Rob and Kristie Lynts. Lynts is from Nahma, Mich. and is a 1992 Big Bay de Noc High School graduate. Kristie is from Florence, Wis. She is the granddaughter of Tee and the late Ron Lynts of Nahma and Brant and Cindy Brolin of Florence.

The Spartans finished the season with a perfect 15-0 record, sweeping all of their matches, giving them a perfect 45-0 set record.