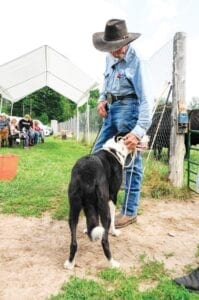 There are dogs and, then, there are working dogs. It’s something to see when a good handler works with the innate instinct of a good herding dog in order to accomplish a job.

This past weekend, handlers and their dogs gathered for a herding clinic with Terry Wofford, hosted by local veterinarian, Sara Michelin.

Wofford, dressed in denim, boots, and a cowboy hat, speaks softly and with a southern accent.

He grew up on a farm in Summerville, Georgia and has worked with dogs and stock from a very young age.

“My grand dad had rough collies, Lassie dogs,” Wofford said. “I was working those dogs to help bring in the cows when I was five years old. I didn’t know what I was doing but the dogs knew what to do.”

At 15, Wofford started bull riding. He rode bulls for 13 years walking away “after dang near every bone in my body had been broken.” But he stayed with the circuit swapping the danger of riding for the equally dangerous job of rodeo clown. 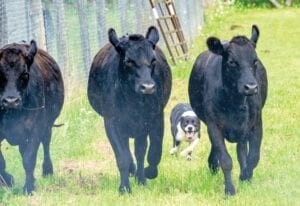 Terry Wofford and his champion border collie, Bucky, were in town for a herding dog clinic this past weekend. All levels of working dogs and handlers practiced the skills it takes to move cattle, sheep, and even goats. Top photo: Wofford and Bucky. Above: Bucky at work moving cattle. (Photos by Emily Meier)

“I went from riding to fighting them as a bullfighter, rodeo clown, trying to save the bull riders,” Wofford said. “I put my life on the line for those boys.”

Back then, he traveled all over the country with his dog, Gretchen, a weimeraner. He laughs and shakes his head when he admits to her breed, not a typical dog for a cowboy hat wearing, bull riding and fighting kind of guy. But when she showed up at his cousin’s house one day while they were sitting on the porch, Wofford and the dog took a shine to each other. And when her owners were located after some time, Wofford couldn’t let her go. So he bought her from them. “I’d fallen in love with -CONTINUED from page 1. her, she’d been riding shotgun in my truck. And, oh, she took good care of my truck.”

A good dog story makes his smile reach his eyes.

Wofford tells of how Gretchen wouldn’t let a man without a cowboy hat near his truck as long as she was in it. 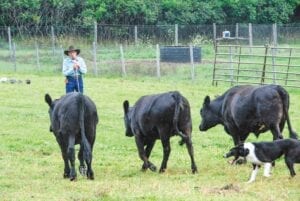 Terry Wofford and his dog Bucky working cattle. Together, they travel across the country helping other handlers and dogs to become better teams. Besides clinics, Wofford also travels as an AKC and CKC judge for working dog trials. (Photo by Emily Meier)

“If you had a hat on you could go in my truck and get anything you wanted,” Wofford said. “But if you weren’t wearing one, well, there was going to be some trouble.”

Together, they traveled over a half a million miles crisscrossing the country.

Today, Wofford is still traveling but now it’s as a judge for both the AKC (American Kennel Club) and CKC (Canadian Kennel Club), and to teach clinics.

“I normally leave home in April and don’t get back home until the end of July,” Wofford said. Though he admits that this year has been a bit different. With trials on hold and the Canadian borders still closed, he’ll be returning home to Florida earlier this year.

He enjoys his work with both handlers and their dogs. Though he admits that the majority of the time the problems lie with the handlers.

“When things aren’t working out, 99-percent of the time, it’s the handler’s fault,” Wofford said. 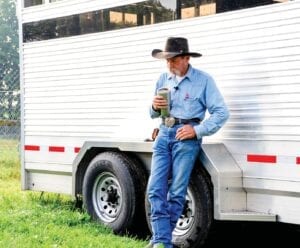 Terry Wofford has been working with dogs and stock since he was a young child. He enjoys working with handlers and dogs of all ages as they learn the art of allowing a dog to do his job.

The ultimate goal is for a dog to be able to move stock- -cattle, sheep, ducks– in a controlled calm way. A good dog can take stock wherever the handler asks without any dust up or stress. And with very little instruction from the handler.”

The problems come when handlers start micromanaging their dogs. And while dog’s can be left or right side dominant, some dogs begin to play to the handler’s weakness and then things can fall apart quickly.

“I worked with one lady who had a bearded collie,”Wofford said. “She kept walking left all the time. I told her, ‘you need to go in the other direction.’ And she said she couldn’t walk that way.Well, that was getting to be a real problem. Your dog needs to be able to work both directions.”

Wofford shakes his head when he thinks about some of the things he’s seen handlers do. But as a judge and a clinician, there are some things he just won’t allow.

As a judge, he doesn’t stand for people “yelling and hollering at their dogs.” He likes to see a dog leave on a good note, even if the trial has resulted in a disqualification or other disaster. 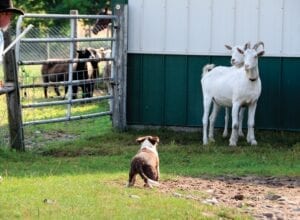 “When I’m judging, and I see a dog getting into trouble out there, I’ll stop the run and tell the handler to get the dog stopped,”Wofford said. “I give them the extra time to try and fix it, put it back together. I don’t like seeing a dog leaving feeling beat.”

And as a trainer, he advises never pushing a young dog too fast.

“When I get a dog, and first start working with them, I don’t work them more than three to five minutes at a time. I try to put a good foundation under them,” Wofford said. Then he chuckles as he recalls his championship winning dog, Bucky’s missteps from earlier in the day. “But sometimes the foundation cracks and you’ve got to go back and patch it.”

Overall, Wofford admits that he’s here for the fun of it. He enjoys working with dogs in all capacities. As a judge, he enjoys seeing the good runs- -when everything works out for the dog, the handler, and the stock. As a teacher, he likes helping to get the handler better connected to their dog. And when he’s working his own dogs, he likes knowing he can trust the dog to help take the stock where he needs them to go. 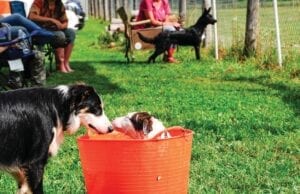 Good dogs are good teachers. And sometimes, bad days are the best lessons.

“You see, that’s the thing,” Wofford said. “Just when you think you’ve got it, everything can fall apart. But you’ve got to get back up and fix things.” 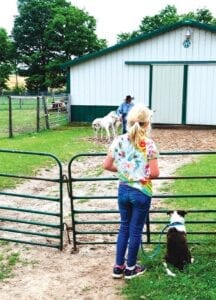