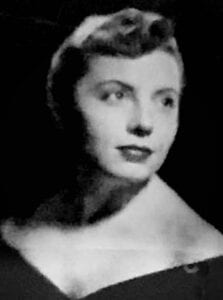 Sally was born in Detroit, Mich. on June 19, 1937, to George and Esther (Rahn) DeBolt. She is preceded in death by her husband, Thaddeus Karl Ketchum, and her brother, George Richard “Dick” DeBolt.

She is survived by her three children, Karl, Blake, and David; her beloved Black Jack the Labrador; and her grandchildren, Umberto, Hailey, Silas, and Brianna.

Sally was a writer, a teacher, a speaker, a dog lover, foodie, gardener, and devoted wife and parent. She wrote gardening and cooking columns for the Traverse City Record Eagle and also authored several books including The Red Hibiscus, Super Student/Happy Kid, The Bread Garden, 125 Years of Zion Lutheran Church History, and Nikos: An American Odyssey. She won several local and national writing and teaching awards including the Dow Jones Teacher of the Year Award, and Quota Club International Woman of the Year.

Sally grew up in Detroit and in her youth was a clothing model for Sears Catalog. She enjoyed spending summers at her family’s cottage in Alpena, Mich., on Lake Huron and developed a lifelong love for the Great Lakes and nature. She graduated from Grosse Pointe South High School and University of Michigan (BA in English ‘56), where she met Thad. She was a member of the Alpha Xi Delta sorority. She also conducted graduate studies at Wayne State University. She married Thad on June 27, 1959. In Grosse Pointe Woods, she was active in her children’s education and began her writing career. In 1980, she moved to Williamsburg, Mich. and taught writing and literature at Elk Rapids High School. She worked tirelessly to provide educational opportunities for her students. In 2000, Sally and Thad retired to Fairport to enjoy life on Lake Michigan. She was a member of Zion Lutheran Church in Manistique, Mich.

Sally was known well for her love of all things Christmas, cooking, the Detroit Red Wings, and gardening. Among her favorite foods to prepare were her cheddar-crust apple pie and scalloped potatoes. In the summer, she could often be found digging in her perennial garden with her sun hat, or grilling some of her fantastic rosemary pork chops.

Fausett Family Funeral Homes of Manistique is assisting the family with arrangements. To share a memory or leave condolences visit Fausettfh.com.